47. The breeder waited over 3 hours before seeking an emergency Caesarean section for his Dachshund

The breeder blamed me for the 2 inactive puppies delivered by an emergency Caesarean section today as I had used too much anaesthetic gas.  The puppies were delivered very quickly and they were alive when handed to him. They were still alive but not the vigorous crying types as seen in timely Caesarean section as in his Yorkshire Terrier with 3 puppies (another video).


The 3 pups occupied the right uterine horn only. All 3 jammed in a row. The first one came out with difficulty. The breeder had injected oxytocin 0.3 ml IV as I saw some hair clipped from the dam's right forearm and a needle prick.

"Be speedy," he requested. More like in desperation as he had suffered losses yesterday in the Maltese caesarean section with one dead smelly premature pup. He had asked for discount as there was the dead pup. It is difficult to deal with breeders who don't think that a vet has very high  overheads in Singapore. He had used many other vets who would do Caesarean sections for only $500 or less but I charged 3 times more regardless of the time and day or night or the number of puppies.

The dam's abdomen overfilled with clear perionteal fluid. A previous vet had done a C-section as evident by the long scar. The dorsal side of the uterine horn had scar about to burst as some areas were stretched. This vet had made a long incision and exteriorized the whole uterus. For me, I incised a small cut and incised the ventral aspect of the uterine horn. In this case, there was a weak scar on the horn from a previous surgery. I cut on the lower side of the right uterine horn, around 5 cm long and took out the horn and then the 2 pups jammed tightly in this overstretched horn. The first pup born naturally had also lived in this right horn and so there was really a big obstruction causing peritoneal effusion. The left horn was empty and not swollen, indicating no pups had attached there.

I used isoflurane gas only and maintained the dam at around 1-2% instead of 2.5 to 3% to effect.
The dam was definitely stressed too as evident by the difficulty in giving birth to 3 big pups. The breeder expected a live dam and pups and he got what was expected.

But the 2 pups were not active as they had been stressed by the more than 3-hour-delay. So, they do not cry loudly within 1 minute of delivery unlike the Yorkshire with 3 puppies I delivered by caesarean last week for the same breeder. (video) 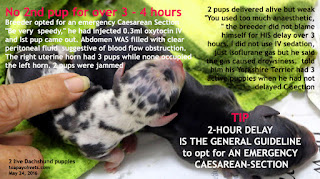 In Caesarean section, the vet's reputation is at risk. If the dam and pups are alive at the end of the operation, the breeder is happy. If not, he may seek another vet.

Posted by toapayohvets at 4:38 PM