In 2010, the mother and daughter consulted me when the right eye of their 10-year-old Shih Tzu had a deep corneal ulcer.  I operated using the 3rd eyelid flap and tarrsorrhapy method. This involved covering the corneal ulcer with the 3rd eyelid and stitching up the upper and lower eyelids.

The owners did not consult me anymore as the right eye ulcer healed well. It had become a dark brownish-black scar of around 4 mm across, preventing any leakage of the aqueous fluid from inside the eyeball. You can see in the image below as I saw the good right eyeball in April 2016, some 6 years later. 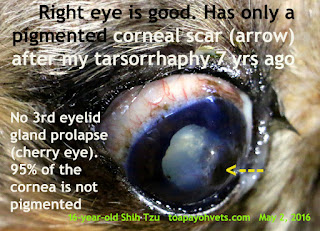 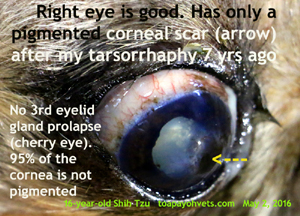 Later, in 2010, the owner consulted another vet when the dog's left eye had an ulcer. That vet prescribed 2 types of eye drops and apparently, the eyeball was OK after that. However, in 2013, the left eye had another corneal injury with the aqueous flowing out from the ruptured ulcer. The daughter purchased eye drops from a pet shop and applied drops twice a day for the past 5-6 years. The whole eyeball looked normal in size but the cornea was pigmented black, blinding the dog. A white scar existed on the central part. The owner showed me 2 pictures which showed a normal sized eyeball. But there appeared to be pus lingering inside the eyeball as I enhanced the pictures as shown below: 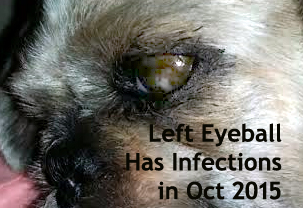 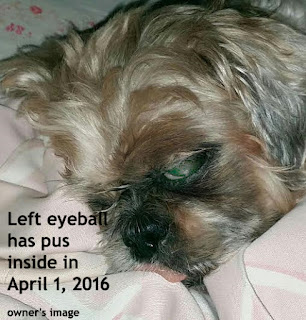 Around April 9, 2016, the dog's left eyeball swelled. The owner rushed the dog to the 3rd vet who hospitalised the dog for around 3 days and did tests. He advised enucleation or removal of the badly infected eyeball but warned, as all vets would do similarly, that the dog had a very high risk of dying under anaesthesia on the operating table. The daughter discharged the old dog to consult me for another opinion.

The eyeball was badly infected and swollen. lt had caused the dog much pain and rubbing was a relief for him. The more he rubbed, the bigger the eyeball swelled. So, my advice of enucleation was similar to the other vet. And the owners were forewarned of the high anaesthetic risks of dying. If the dog does not die on the table, he may still die post-operation due to inadequate nursing and loss of appetite.

The mum and daughter appreciated the high stakes involved. They consented to the surgery. They came to see the beloved dog just before my surgery. In case, that visit was the last in this world of the living.  16 years of companionship. The daughter would be only 12 years old and would be studying for her PSLE (Primary School Leaving Examination). Now, she is a slim lady working in a good job after graduation.  I noted that she has a small diamond ring on her left ring finger and I was very happy for her. I was very apprehensive that her dog would not make it under my scalpel. 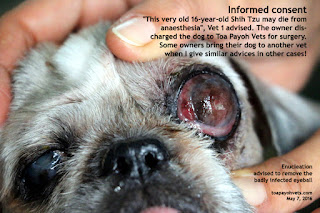 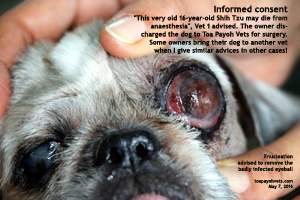 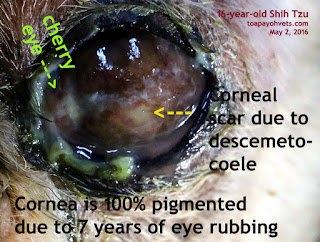 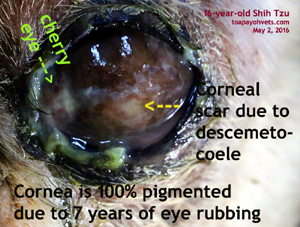 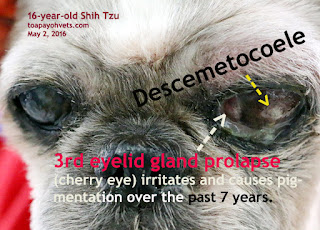 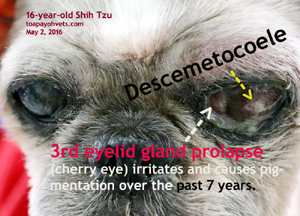 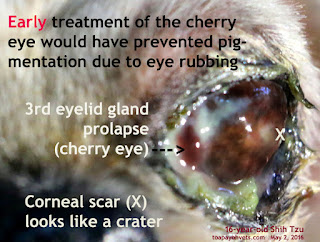 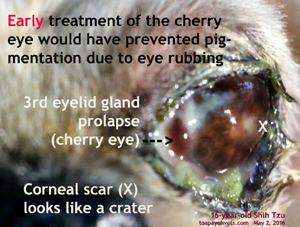 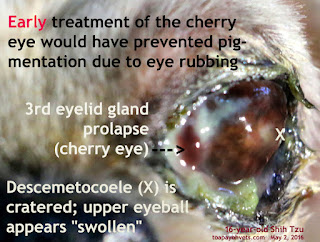 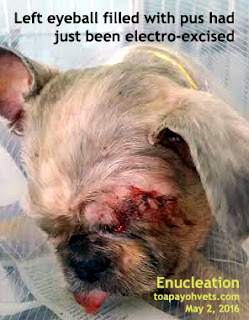 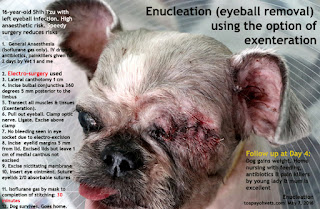 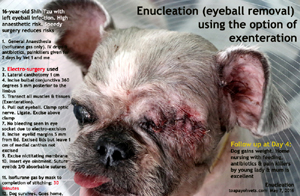 The risk of anaesthetic death would be much less if I could complete my operation in less 15 minutes in my years of experience. But such surgeries take around an hour generally. An experienced vet may take a shorter time.  But SAC - speed, accuracy and completeness takes time, no matter how experienced and skilful a surgeon is.

The dog's heart may just stop pumping and death would ensue in a lengthy anaesthesia as all vets will have encountered. Death on the operating table is very emotional to the owners and if a vet cares for his reputation, it is not good for his name. No owners forgives or forgets a death on the operating table, even with informed consent. There would be a family member who would not forget.

With a heavy heart, I operated. I decided on using electro-surgery although normally, I would not use electricity to cut. Dr Daniel was not in favour of my decision, for the reason that traditionally, the operation was performed using the traditional method of the scalpel blade manually.

Electro-surgery would cut down my operating time. I would take out the whole eyeball and muscle attachment and tie the optic nerve in half the time. This would give the dog a much shorter anaesthetic exposure and the 16-year-old heart would not be overwhelmed and stop beating.

Would electro-surgery kill the dog instead. Electricity would pass through the heart as well and shocked it to stop beating. Hence, Dr Daniel's disapproval and his check to see me operating. We had not operated enucleation of the eyeball using electricity and this was the first time. A time of life and death. A poor judgment of the veterinarian to use electro-surgery.


May 1, 2016
I connected to this 16-year-old Shih Tzu whom I had not seen since I did a tarsorrhaphy on her right eye some 9 years ago. The young lady is now a career girl. The dog went to an emergency clinic as the right eyeball was "swollen."  Hospitalised 2 days and the eyeball is advised to be taken out due to infections, possible glaucoma. But the anesthestic risks of the dog dying on the op table are very high.

I observed the dog for 3 hours from 2.30 pm to 5.30 pm while she was given the IV drip to clear the narcotic drugs from Vet 1. A clearer picture emerges as the dog recovers from the dopiness and was able to stand up and open the eyes. I took some images (above).

The right eye was good and is evidence of the success and usefulness of tarsorrhaphy which some younger vets I encountered,  have been taught by their professors,  to be of no use in the treatment of corneal ulcerations in the dog. This right eye is evidence of its effectiveness.

The young lady did not seek me to treat the left eye for corneal ulceration which occurred soon after.. She went to another vet for a similar corneal ulceration. He prescribed atropine and eye drops. The ulcer might have healed but there was continuous eye discharge since 2009. On examination today, I noted that this left eye had a "cherry eye". This would account for the daily eye discharge and irritation. Chronic eye rubbing led to 100% pigmentation of the cornea.  Inflammation led to dry eye of the left eye. The owner bought "Bright Eye" eye drops for "dry eyes" from the pet shop and apply twice a day since 2009.

ANAESTHESIA
10.56 am Isoflurane gas by mask. Intubate.  Electro-surgery. Enucleate. Not much bleeding.
11.30 am Completion of skin sutures.

Blood test did not show kidney or liver damage but serum urea was high.
The dog was very old and not  in the best health as around 1% of gas was sufficient as compared to a young dog that would need 2-2.5%.

Unusual situation. The mouth appeared swollen and small such that the tongue was sticking out normally in this Shih Tzu. Normal Shih Tzus do not have tongues sticking out.

On the left side of the tongue, there was cystic structure.  When I pulled out the tongue to look for the epiglottis, only a part was seen. On my first try, the endotracheal tube entered the trachea. So it was a relief for me.


FLASH BACK TO 2010 as I had done a case study and had some images of the two eyes in 2010. The owner did not return to me for review of the right eye as there was no problem.
This case study showed the effectiveness of the 3rd eyelid flap plus tarsorrhaphy done on the right eye for descemetocoele.

As for the left eye, it is too late to perform the surgery as the inside of the eyeball has been infected with bacteria.

During enucleation surgery, I saw a lot of creamy pus inside the eyeball. The cataract lens was also coated cream yellow instead of being cloudy white crystalline as you can see in the image of the right eye in 2016 (above).


MY 2010 IMAGES OF THE RIGHT EYE ULCER  CASE STUDY 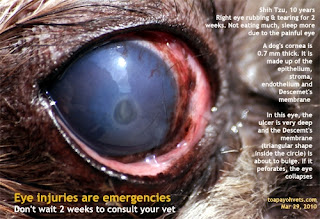 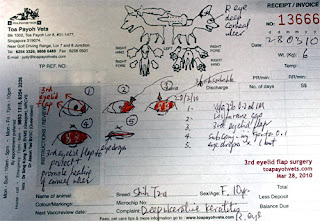 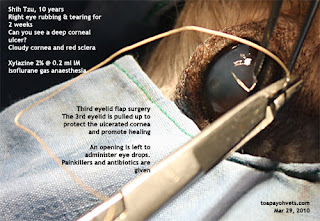 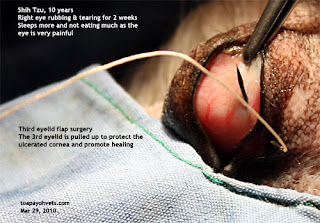 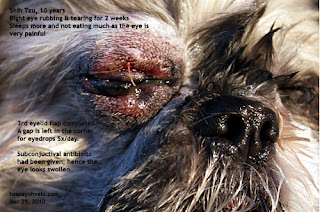 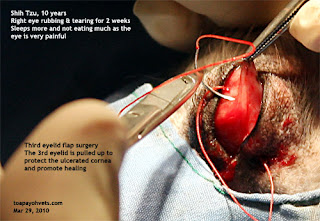 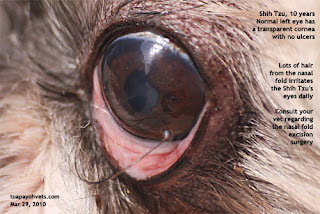 Posted by toapayohvets at 5:20 PM